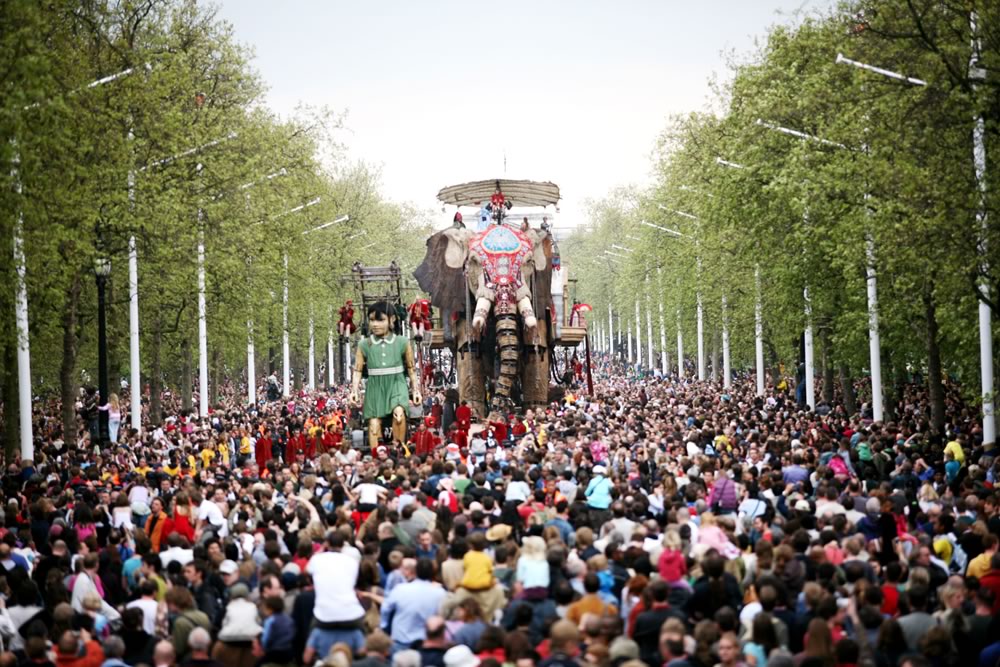 ‘The arts don’t have to take place behind closed doors’, says Nicky. Artichoke’s projects
typically take place in public spaces and in the open air – ‘and this brings huge benefits
in terms of audiences’, she adds. ‘You capture the attention of people who find it
daunting to go into a gallery or a theatre’. There’s no compromise in quality, she insists:
‘Because it’s in the streets doesn’t mean it has to be second rate. It should be as good
as anything in the best theatre or gallery. It should just be more available – making
great art accessible for everyone’.
Artichoke events place the audience at the centre of the experience. ‘The audience isn’t
always part of the show as such, but they are essential to it, and the spectators in turn
become part of the spectacle.’ The nature of Artichoke’s events draws big crowds, who
become immersed in the experience, and amplify its resonance.
The audience is occasionally directly involved: 35,000 applied to take part in
Antony Gormley’s One & Other, the Trafalgar Square Fourth Plinth commission,
and 2,400 people selected at random took their turn to stand there for an hour doing
whatever they chose. Over the 100 days of the project, a community grew up among
the participants themselves (they recently held a reunion), and another wider community
was created among the hundreds of thousands worldwide who watched the 24/7
live streaming, and contributed 65,000 comments. ‘This demonstrated to us the
potential of broadening the audience through the internet, and we want to develop this
further’, says Nicky.
‘We don’t go back to the same place again and again, and we rarely repeat an event,
so there is not a process of developing a specific audience’, says Nicky. Nonetheless,
there is, she says, a perceptible cumulative effect. ‘Of course our events are fun, but
there’s more to them than that’, she says. One aspect is that audiences witness a
reclaiming of the streets, a demonstration that art has a right to take place anywhere.
‘They are changed in terms of their attitude to arts and toward public space’, she says.
Another aspect is that the evident success of the projects has driven a shift in the view
of local authorities, eroding the initial resistance to the inevitable administrative
disruption these events generate. ‘We depend heavily on local authorities – we can’t
work without their involvement in everything from permits for installations to changes
in bus routes. But now they are seeing the value of cooperation – and that is developing
another new and important audience’, says Nicky

The Sultan’s Elephant was the biggest piece of free theatre ever seen in London, set against the city’s magnificent landmarks. French theatrical magicians Royal de Luxe had already toured their elephant across Europe, but had never before performed in the UK.
Thousands packed the streets of central London as Royal de Luxe’s little girl giant and majestic elephant played tourists in May 2006.
The vast, time-travelling mechanical elephant, taller than Admiralty Arch and 42 tonnes in weight, was joined by a giant girl, twenty feet high. For four days they enthralled their audience with sprays of water, bus rides and by sewing cars to the ground. Then, when their time was up, they disappeared in a magical puff of smoke, leaving behind many wonderful memories.

The Artists
Royal de Luxe are an extraordinary European street theatre company, renowned on three continents but hardly known in Britain. The director Jean Luc Courcoult founded the company in 1979. They have performed all over the world ever since.
The company has visited countries all over Europe as well as Korea, China, Vietnam, Chile and Africa. Some of their most celebrated shows – including La véritable histoire de France,Roman photo tournage and Le péplum have been revived many times. They spent six months in Africa and three in China.
In the past dozen years, they have created a series of spectacular shows involving giant figures as big as 11 or 12 metres high. The animal or giant arrives in town and lives its life, going about its business for a few days. Extraordinary interactions take place between passers-by and the performance. By the end of the performance, huge crowds gather daily to watch the latest episode in the life of the visiting creature.
The Sultan’s Elephant was the fifth in the series of giant pieces, the others being Le Géant tombé du ciel, Le géant tombé du ciel: dernier voyage, Retour d’Afrique and Les Chasseurs de girafes.
La visite du sultan des Indes sur son éléphant à voyager dans le tempswas first performed in Nantes in 2005, on the occasion of the centenary of Jules Verne’s death. This production was commissioned by the cities of Nantes and Amiens and has received a special grant from the Ministry of Culture and Communication.